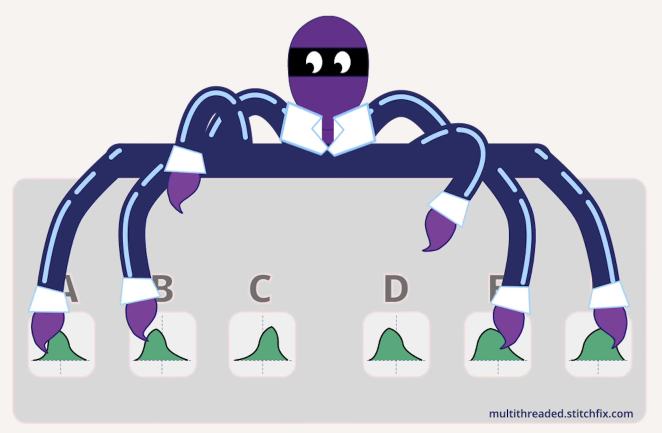 Mab is a library/framework for scalable and customizable multi-armed bandits. It provides efficient pseudo-random implementations of epsilon-greedy and Thompson sampling strategies. Arm-selection strategies are decoupled from reward models, allowing Mab to be used with any reward model whose output can be described as a posterior distribution or point estimate for each arm.

Mab also provides a numerical one-dimensional integration package, numint, which was developed for use by the Mab Thompson sampler but can also be used as a standalone for numerical integration.

Mab is not concerned with building, training, or updating bandit reward models. It is focused on efficient pseudo-random arm selection given the output of a reward model.

A Bandit consists of three components: a RewardSource, a Strategy and a Sampler. Mab provides implementations of each of these, but you are encouraged to implement your own as well! Each component is defined by single-method interface, making it relatively simple to fully customize a Mab bandit.

SelectArm will get the reward estimates from the RewardSource, compute arm-selection probabilities using the Strategy and select an arm using the Sampler.

Go's context.Context should be used to pass request-scoped data to the RewardSource, and it is best practice to only use it for cancellation propagation or passing non-controlling data such as request IDs.

The values needed by the contextual bandit to determine the reward estimates should be passed using the last argument, which is named banditContext.

The unit input to SelectArm is a string that is used for enabling deterministic outcomes. This is useful for debugging and testing, but can also be used to ensure that users get a consistent experience in between updates to the bandit reward model. Bandits are expected to always provide the same arm selection for the same set of reward estimates and input unit string.

The output of SelectArm is a struct containing the reward estimates, computed probabilities, and selected arm.

A RewardSource is expected to provide up-to-date reward estimates for each arm, given some context data. Mab provides a basic implementation (HTTPSource) that can be used for requesting rewards from an HTTP service, and some stubs that can be used for testing and development.

A typical RewardSource implementation is expected to get reward estimates from a database, a cache, or a via HTTP request to a dedicated reward service. Since a RewardSource is likely to require a call to some external service, the GetRewards method includes a context.Context-type argument. This enables Mab bandits to be used in web services that need to pass request-scoped data such as request timeouts and cancellation propagation. The second argument should be used to pass bandit context data to the reward source. The reward source must return one distribution per arm, conditional on the bandit context.

Reward estimates are represented as a Dist for each arm.

Mab lets your combine any distribution with any strategy, although some combinations don't make sense in practice.

For epsilon greedy, you will most likely use Point distributions, since the algorithm only cares about the mean of the reward estimate. Other distributions can be used, as long as they implement a Mean() that returns well-defined values.

The Null() function returns a Point distribution at negative infinity (math.Inf(-1)). This indicates to the Strategy that this arm should never be selected. Each Strategy must account for any number of Null distributions and return zero probability for the null arms and the correct set of probabilities for the non-null arms, as if the null arms were not present.

A Mab Strategy computes arm-selection probabilities from the set of reward estimates.

Mab also provides a Monte-Carlo based Thompson-sampling strategy (mab.ThompsonMC) but it is much slower an less accurate than mab.Thompson, which is based on numerical integration. It is not recommended to use ThompsonMC in production.

That is, the probability of selecting an arm under Thompson sampling is the integral of that arm's posterior PDF times the posterior CDFs of all other arms. The derivation of this formula is left as an exercise for the reader.

Computing these probabilities requires one-dimensional integration, which is provided by the numint subpackage.

The limits of integration are determined by the Support of the arms' distribution, so Point distributions will always get zero probability using Thompson sampling.

This is the basic epsilon-greedy selection strategy. The probability of selecting an arm under epsilon greedy is readily computed from a closed-form solution without the need for numerical integration. It is based on the Mean of the reward estimate.

The proportional sampler computes arm selection probabilities proportional to some input weights. This is not a real bandit strategy, but exists to allow users to effectively shift the interface between reward sources and bandit strategies. You can create a RewardSource that returns the desired selection weights as Point distributions and then use the Proportional strategy to make sure that the sampler uses the normalized weights as the probability distribution for arm selection.

A Mab Sampler selects an arm given the set of selection probabilities and a string. The default sampler implementation uses the SHA1 hash of the input string (mod 1000) to determine the arm.

The Thompson sampling strategy depends on an integrator for computing probabilities.

The numint package provides a quadrature-based implementation that can be used for Thompson sampling. It can be used effectively with just the default settings, or can be fully customized by the user.

The default quadrature rule and other parameters for the numint quadrature integrator have been found through trial-and-error to provide a good tradeoff between speed and reliability for a wide range of inputs including many combinations of normal and beta distributions.

See the numint README and documentation for more details.

More detailed refence docs can be found on pkg.go.dev

Mab and Numint are licensed under the Apache 2.0 license. See the LICENSE file for terms and conditions for use, reproduction, and distribution.

Bigmachine is a library for self-managing serverless computing in Go

Bigmachine Bigmachine is a toolkit for building self-managing serverless applications in Go. Bigmachine provides an API that lets a driver process for

go-paddle is a Go client library for accessing the Paddle API.

go-paddle go-paddle is a Go client library for accessing the Paddle API. Installation go get github.com/Fakerr/go-paddle Alternatively the same can be

The open source, end-to-end computer vision platform. Label, build, train, tune, deploy and automate in a unified platform that runs on any cloud and on-premises.

End-to-end computer vision platform Label, build, train, tune, deploy and automate in a unified platform that runs on any cloud and on-premises. onepa 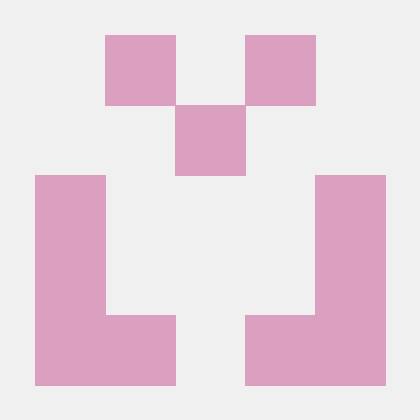