Note: All future development is done in the Go version.

Conception is an experimental research project, meant to become a modern IDE/Language package. It experiments with discarding old conventions that were based on computational limitations (e.g. breaking code into files on a file system), and tries to make the process of coding as efficient as possible. I'm a fan of ideas from Bret Victor's talks, Light Table, Code Bubbles, Subtext, and of course I have ideas of my own.

My main guiding principle is to find ways to avoid manual duplication of code, human efforts.

Feel free to steal any good ideas you see here. My goal is to benefit the world as much as possible; personal gains are a lesser priority.

I work on this project in my limited free time. 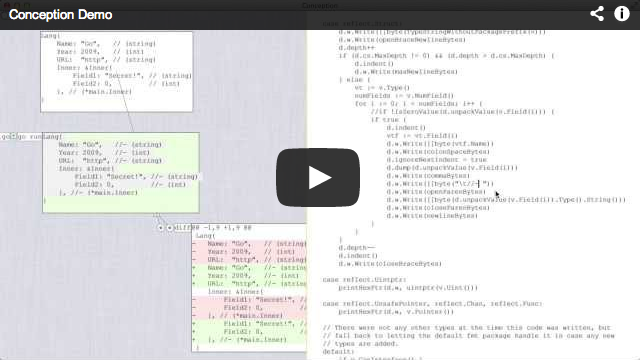 These WIP screenshots present a partial outlook into the things I'm prototyping. 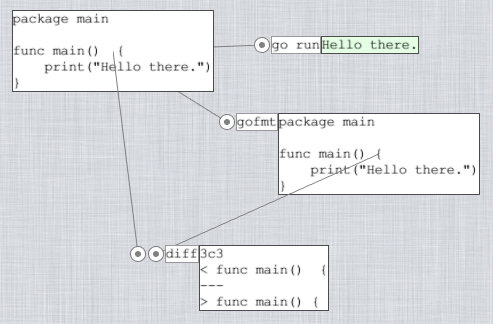 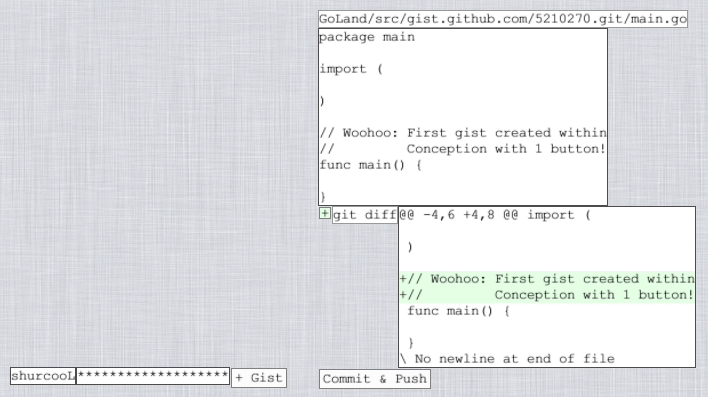 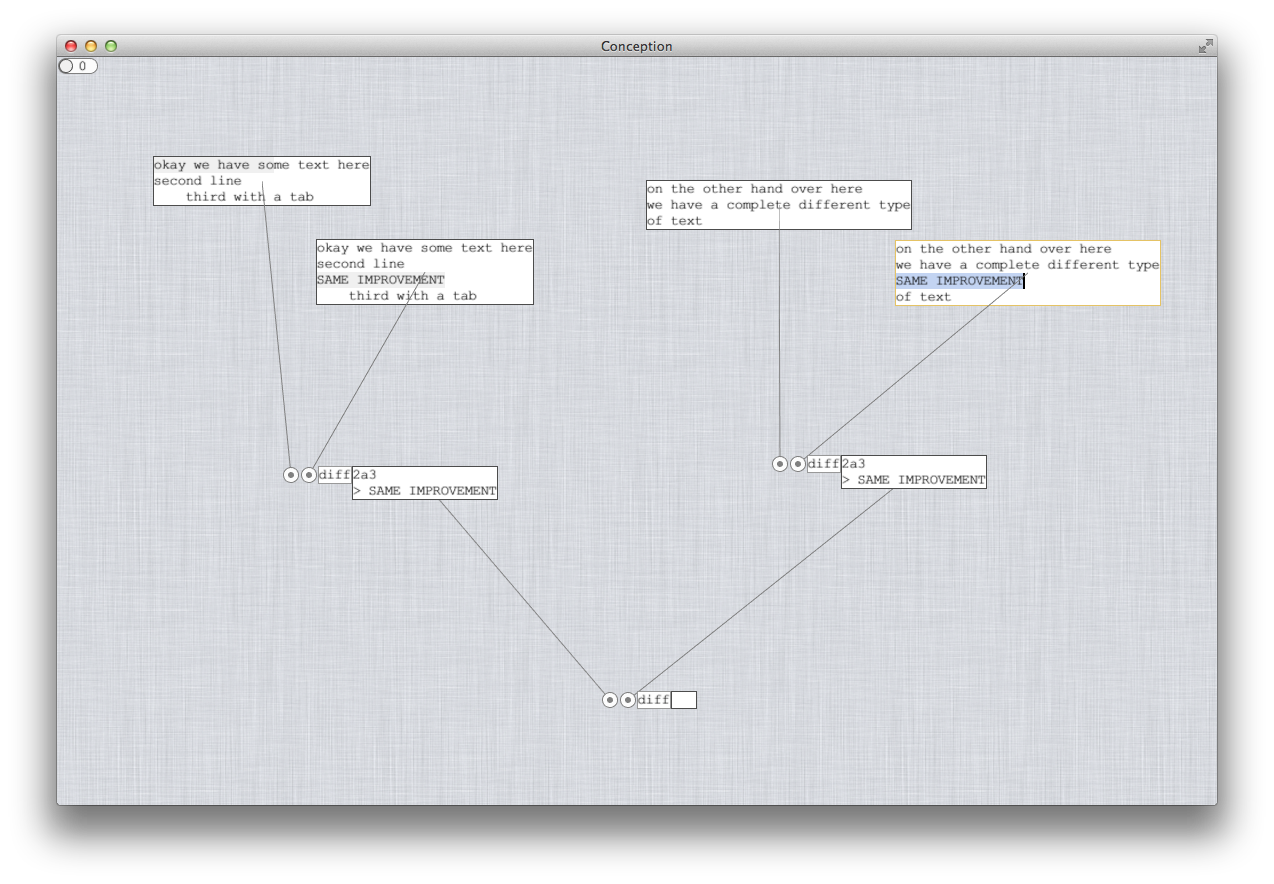 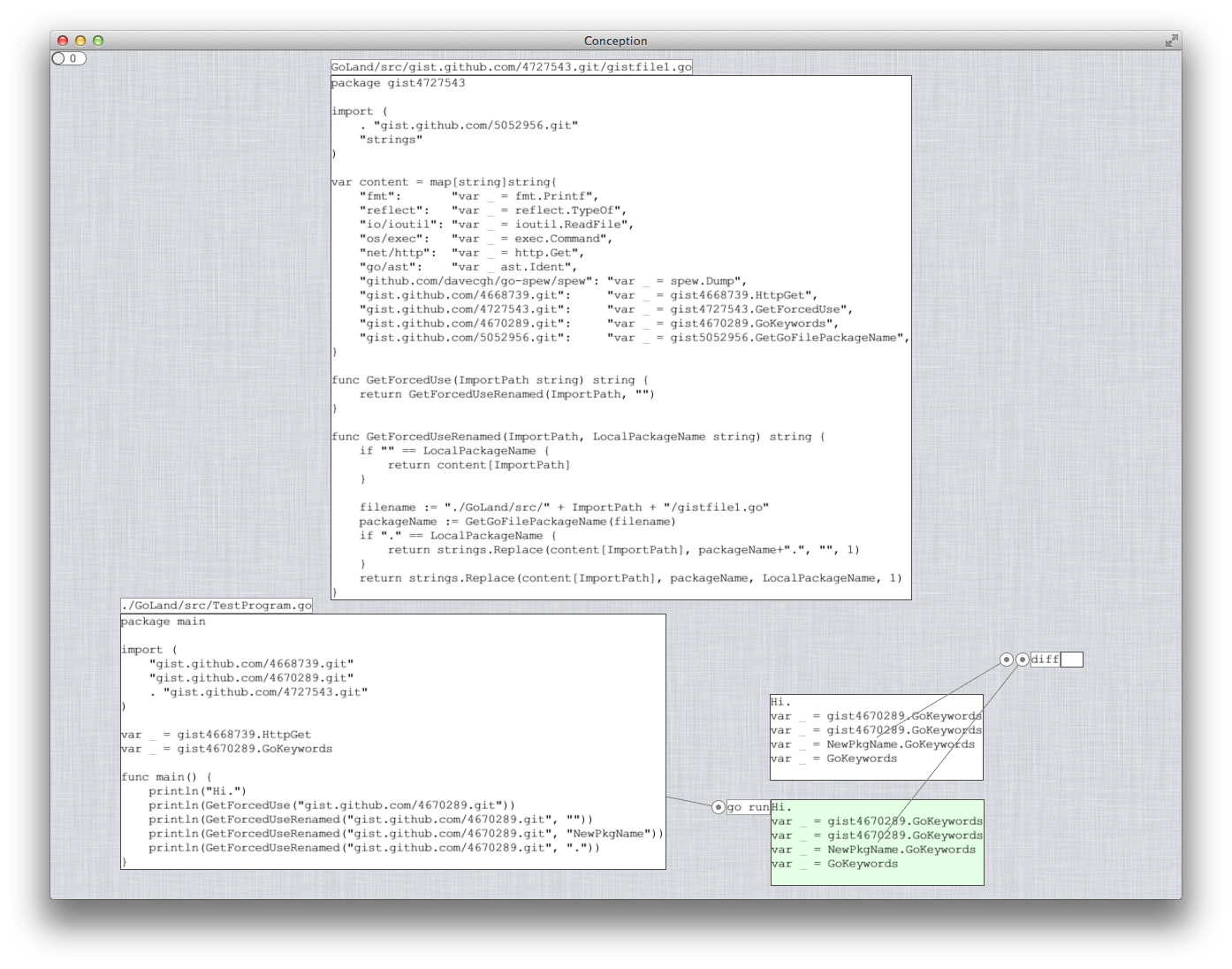 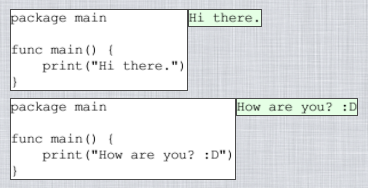 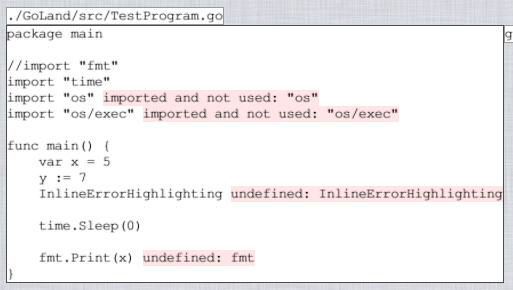 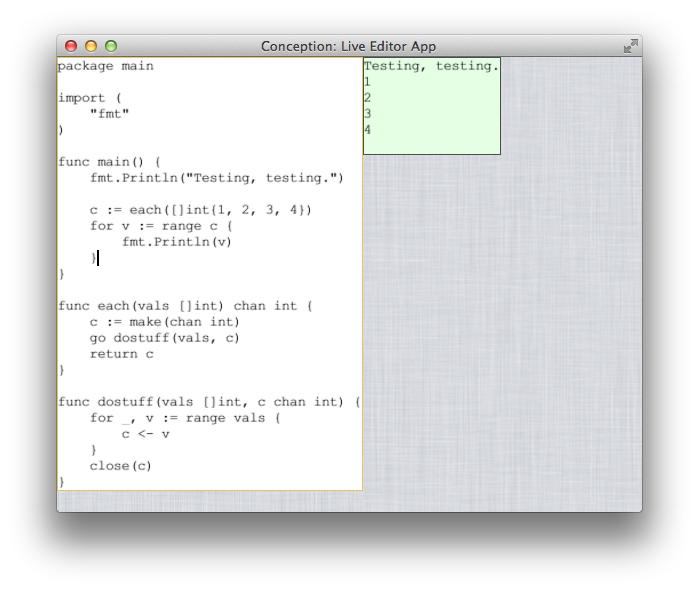 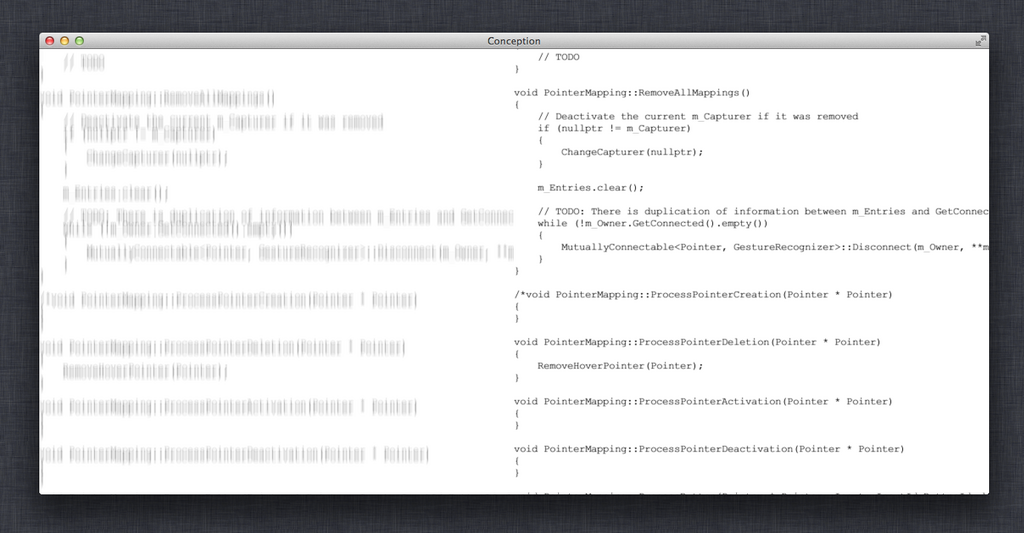 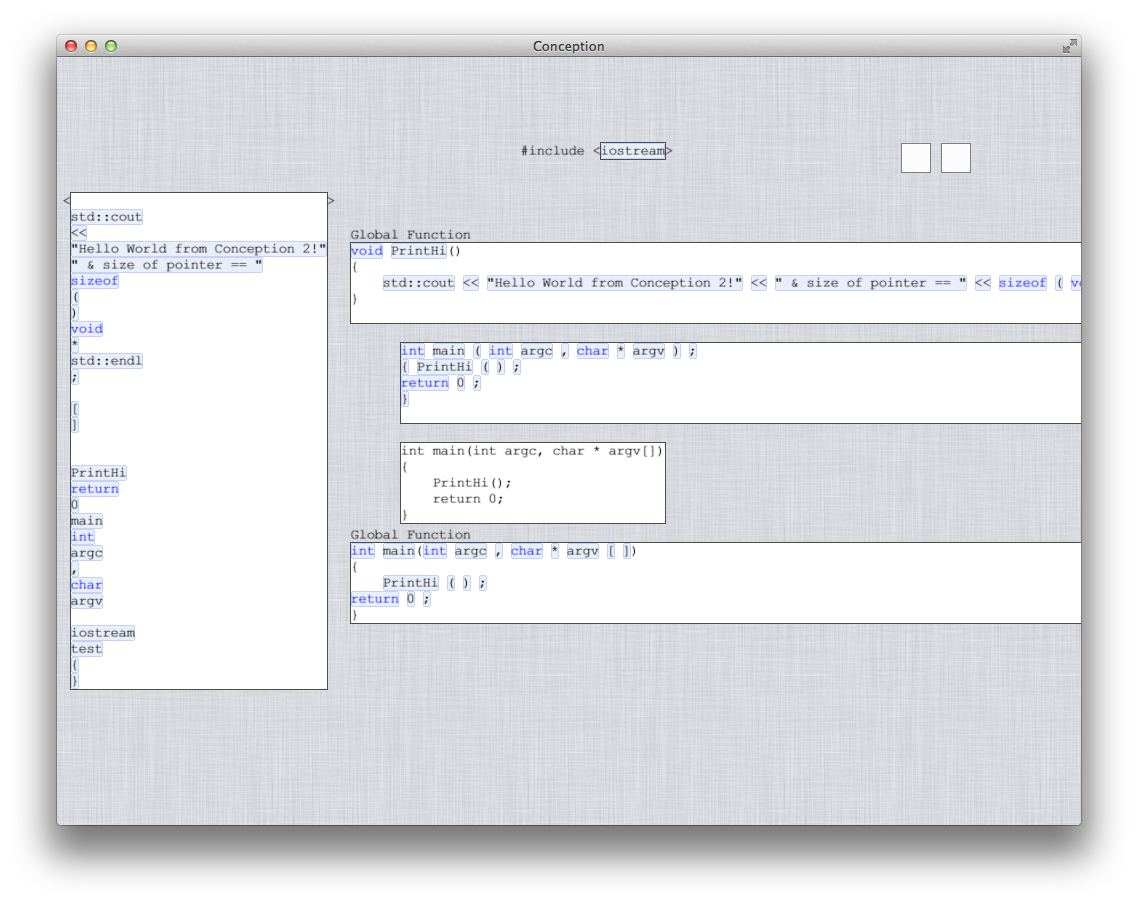 The Xcode project is the most up to date and should allow you to compile and run right away.

There's a makefile for Linux. It compiles with the latest clang, but is largely untested.

Can be compiled on Windows, but since I use some C++11 features that Visual Studio 2012 doesn't support yet, it will take some effort to compile it there. Either remove C++11 code, or get clang compiler for Windows.

Since it can execute code live, it's potentially as dangerous as a terminal (i.e. don't try to delete files).

It assumes golang is installed (i.e. /usr/local/go/bin/go exists). You might have to change this path if your go binary is elswhere.

For git-related stuff, it assumes git is in your bash's $PATH.

vim-go Features This plugin adds Go language support for Vim, with the following main features: Compile your package with :GoBuild, install it with :G

Golang project for looking up geo from an IP. Meant to be deployed on Render.

geoip-render-go Golang project for looking up geo from an IP. Meant to be deployed on Render. Dependencies In order to use this project, you'll need a

save-a-file benchmarks the many strategies an editor could use to save a file. Example output on a SSD: ext4: $ ./save-a-file ~/tmp/foo 29.195µs per s

A Golang library for testing infrastructure in automated ways.

Infratest Infratest is a Golang library that we hope makes testing your infrastructure using tests that are written in Golang easier to do. The genera

Learning Vim and Vimscript doesn't have to be hard. This is the guide that you're looking for.

Get related domains / subdomains by looking at Google Analytics IDs

AnalyticsRelationships This script try to get related domains / subdomains by looking at Google Analytics IDs from a URL. First search for ID of Googl

A command line utility and library for generating professional looking invoices in Go.

ginvoicer A command line utility and library for generating professional looking invoices in Go. This is a very rough draft and there could still be b

The simple and light self-hosted custom event analytics you were looking for.

Dead-Simple-Game-Analytics What is Dead Simple Game Analytics? An extremely simple self-hosted system to log your game analytics events. No fluff or o

Turn repo with markdown files into a nice looking blog

oDrop is a cross-platform LAN file transfer software to efficiently transfer files between computers, oDrop is useful in environments where GUI is not available.

Gorilla is a REST API template for efficient personal development, implemented based on the CleanArchitecture design philosophy.

The Gorilla Template is a REST API template for efficient personal development, implemented based on the CleanArchitecture design philosophy.

↻lockwise Clockwise is a meeting cost calculator designed to encourage more efficient meetings. The meetings will continue until morale improves. 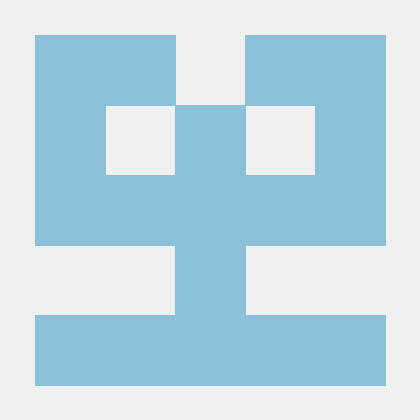 What is more efficient value or pointer method receivers in Go?