Implementation of the NELI leader election protocol for Go and Kafka

Implementation of the NELI leader election protocol for Go and Kafka. goNELI encapsulates the 'fast' variation of the protocol, running in exclusive mode over a group of contending processes.

Leader election is a straightforward concept, long-standing in the academic papers on distributed computing. For a set of competing processes, select one process that is a notional leader, ensuring that at-most one process may bear the leader status at any point in time, and that this status is unanimously agreed upon among the remaining processes. Conceptually, leader election is depicted below. 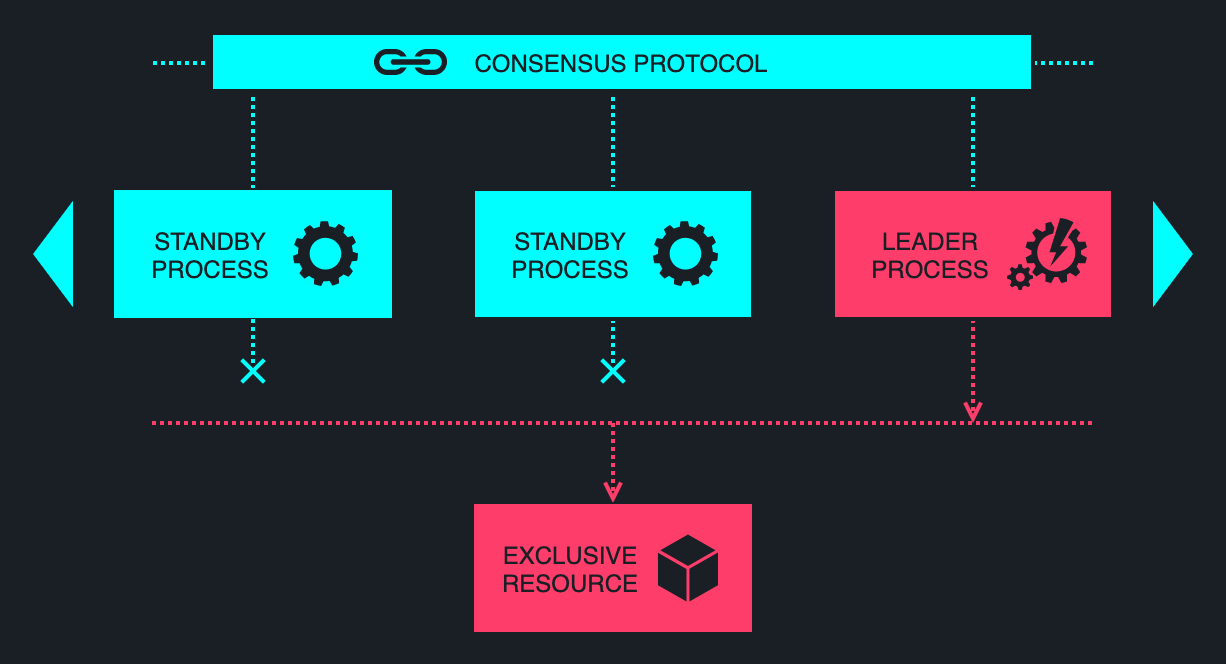 As straightforward as the concept might appear, the implementation is considerably more nuanced, owing to the myriad of edge cases that must be accounted for — such as spurious process failures and network partitions. Leader election also requires additional infrastructure to provide for centralised coordination, increasing the complexity of the overall architecture.

Meanwhile, many event-driven microservices have come to rely upon Apache Kafka for their messaging needs, and Kafka has an internal leader election mechanism for assigning the cluster controller as well as the group and transaction coordinators. Wouldn't it be nice if we could somehow 'borrow' this coveted feature for our own leader election needs?

This is where NELI comes in. Rather than dragging in additional infrastructure components and dependencies, NELI makes do with what's already there.

This is the easiest way of getting started with leader election. A task will be continuously invoked in the background while the Neli instance is the leader of its group.

There are handful of parameters that control goNELI's behaviour, assigned via the Config struct:

Traditionally, leader election is performed using an Atomic Broadcast protocol, which provides a consistent view across a set of processes. Given that implementing consensus protocols is not trivial (even with the aid of libraries), most applications will defer to an external Group Management Service (GMS) or a Distributed Lock Manager (DLM) for arbitrating leadership among contending processes.

A DLM/GMS, such as Consul, Etcd, Chubby or ZooKeeper, is an appropriate choice in many cases. A crucial point raised by the NELI paper (and the main reason for its existence) is that infrastructure may not be readily available to provide this capability. Further to that point, someone needs to configure and maintain this infrastructure, and ensure its continuous availability — otherwise it becomes a point of failure in itself. This problem is exacerbated in a µ-services architecture, where it is common-practice for services to own their dependencies. Should DLMs be classified as service-specific dependencies, or should they be shared? Either approach has its downsides.

Rather than embedding a separate consensus protocol such as PAXOS or Raft, or using an external service, NELI piggy-backs on Kafka's existing leader election mechanism — the same mechanism used for electing internal group and transaction coordinators within Kafka. NELI provides the necessary consensus without forcing application developers to deal with the intricacies of group management and atomic broadcast, and without introducing additional infrastructure dependencies.

Under NELI, leaders aren't agreed upon directly, but induced through other phenomena that are observable by the affected group members, allowing them to individually infer leadership. A member of a group can autonomously determine whether it is a leader or not. In the latter case, it cannot determine which process is the real leader, only that it is a process other than itself. While the information carried through NELI is not as comprehensive as an equivalent Atomic Broadcast, it is sufficient for leader election.

When a NELI client starts, it has no knowledge of whether it is a leader or a standby process. It uses an internal Kafka consumer client to subscribe to a topic specified by Config.LeaderTopic, using the Config.LeaderGroupID consumer group. These parameters may be chosen arbitrarily; however, they must be shared by all members of the encompassing process group, and may not be shared with members of unrelated process groups. As part of the subscription, a rebalance listener callback is registered with the Kafka consumer — to be notified of partition reassignments.

No matter the chosen topic, it will always (by definition) have at least one partition — partition zero. It may carry other partitions too — indexes 1 through to N-1, where N is the topic width, but these may be disregarded. Ultimately, Kafka will assign at most one owner to any given partition — picking one consumer from the encompassing consumer group. (We say 'at most' because all consumers might be offline.) For partition zero, one process will be assigned ownership; others will be kept in a holding pattern — waiting for the current assignee to depart.

Having subscribed to the topic, the client will repeatedly poll Kafka for new messages. Polling is essential, as Kafka uses the polling mechanism as a way of verifying consumer liveness. (Under the hood, a Kafka client sends periodic heartbeats, which are tied to topic polling.) Should a consumer stop polling, heartbeats will stop flowing and Kafka's group coordinator will presume the client has died — reassigning partition ownership among the remaining clients. The client issues a poll at an interval specified by Config.MinPollInterval, defaulting to 100 ms.

Once the client discovers that it has been assigned partition zero, it will set a pair of internal flags isAssigned and isLeader. The former indicating that the client owns partition zero; the latter indicating that it is the assumed leader. It will also invoke the optionally supplied Barrier callback with a LeaderAcquired event, allowing the application to handle the leadership assignment. (For example, to initialise the necessary state before commencing its work.)

Kafka's group coordinator may later choose to reassign the partition to another process. This occurs if the current leader times out, or if the population of contending processes changes. Either way, a leadership change is picked up via the rebalance callback. If the current leader sees that partition zero has been revoked, it will clear both flags and invoke the Barrier callback with a LeaderRevoked event.

The rebalance callback straightforwardly determines leadership through partition assignment, where the latter is managed by Kafka's group coordinator. The use of the callback requires a stable network connection to the Kafka cluster; otherwise, if a network partition occurs, another client may be granted partition ownership behind the scenes — an event which is not synchronized with the outgoing leader. (Kafka's internal heartbeats are used to signal client presence to the broker, but they are not generally suitable for identifying network partitions.)

In addition to observing partition assignment changes, the owner of partition zero periodically publishes a heartbeat message to Config.LeaderTopic. The client also consumes messages from that topic — effectively observing its own heartbeats, and thereby asserting that it is connected to the cluster and still owns the partition in question. If no heartbeat is received within the period specified by Config.ReceiveDeadline (5 seconds by default), the leader will clear the isLeader lag, while maintaining isAssigned. It will then forward a LeaderFenced event to the Barrier callback, taking the worst-case assumption that the partition will be reassigned. If connectivity is later resumed while the process is still the owner of the partition on the broker, it will again receive a heartbeat, allowing it to resume the leader role. If the partition has been subsequently reassigned, no heartbeat messages will be received upon reconnection and the client will be forced to rejoin the group — the act of which will invoke the rebalance callback, effectively resetting the client.

The diagram below illustrates the Fast NELI algorithm. 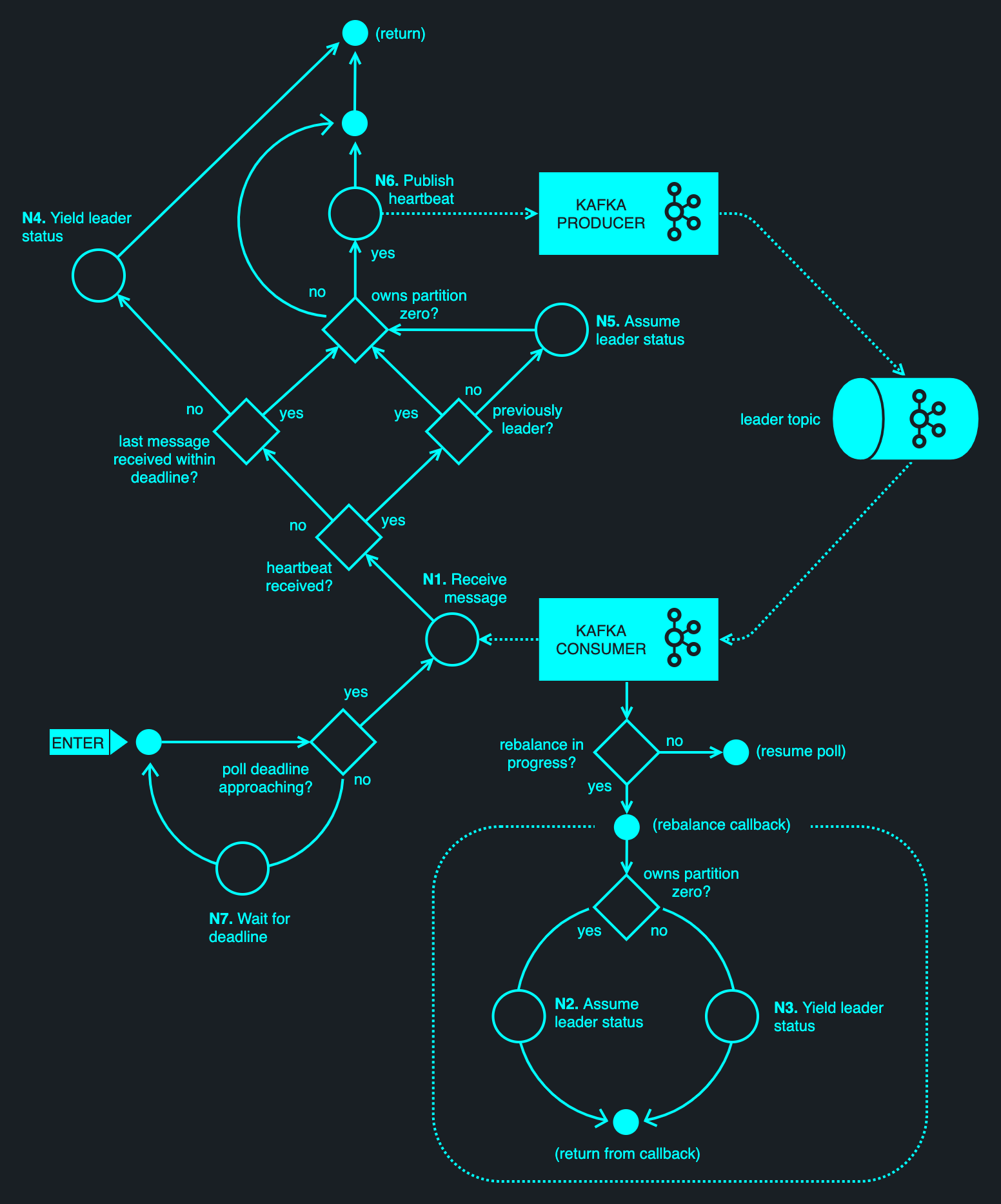 provider-kafka is a Crossplane Provider that is used to manage Kafka resources.

provider-kafka provider-kafka is a Crossplane Provider that is used to manage Kafka resources. Usage Create a provider secret containing a json like t

ChizBroker is a fast and simple GRPC based implementation of kafka.

Chiz Broker: a broker for fun ChizBroker is a fast and simple GRPC based implementation of kafka. Features: Ready to be deployed on kubernetes Prometh

Sarama is a Go library for Apache Kafka 0.8, and up.

sarama Sarama is an MIT-licensed Go client library for Apache Kafka version 0.8 (and later). Getting started API documentation and examples are availa

Apache Kafka Web UI for exploring messages, consumers, configurations and more with a focus on a good UI & UX.

Study project that uses Apache Kafka as syncing mechanism between two databases, with producers and consumers written in Go.

Kafka DB Sync Study project that uses Apache Kafka as syncing mechanisms between a monolith DB and a microservice. The main purpose of this project is

A quick introduction to how Apache Kafka works and differs from other messaging systems using an example application.

Apache Kafka in 6 minutes A quick introduction to how Apache Kafka works and differs from other messaging systems using an example application. In thi

Big Queue on Go This is a simple big queue and implementation in kafka, rabbit and aws sqs. Publish in a topic in kafka: Use NewPublisher method to cr

Protocol and Reference Implementation Mercure is a protocol allowing to push data updates to web browsers and other HTTP clients in a convenient, fast

ChanBroker, a Broker for goroutine, is simliar to kafka

Introduction chanbroker, a Broker for goroutine, is simliar to kafka In chanbroker has three types of goroutine: Producer Consumer(Subscriber) Broker