News: still worry about how to write the correct Casbin policy? Casbin online editor is coming to help! Try it at: https://casbin.org/editor/

Casbin is a powerful and efficient open-source access control library for Golang projects. It provides support for enforcing authorization based on various access control models.

All the languages supported by Casbin:

In Casbin, an access control model is abstracted into a CONF file based on the PERM metamodel (Policy, Effect, Request, Matchers). So switching or upgrading the authorization mechanism for a project is just as simple as modifying a configuration. You can customize your own access control model by combining the available models. For example, you can get RBAC roles and ABAC attributes together inside one model and share one set of policy rules.

The most basic and simplest model in Casbin is ACL. ACL's model CONF is:

We also support multi-line mode by appending '\' in the end:

Further more, if you are using ABAC, you can try operator in like following in Casbin golang edition (jCasbin and Node-Casbin are not supported yet):

But you SHOULD make sure that the length of the array is MORE than 1, otherwise there will cause it to panic.

For more operators, you may take a look at govaluate

What Casbin does NOT do:

You can also use the online editor (https://casbin.org/editor/) to write your Casbin model and policy in your web browser. It provides functionality such as syntax highlighting and code completion, just like an IDE for a programming language.

Note: you can also initialize an enforcer with policy in DB instead of file, see Policy-persistence section for details.

We also provide a web-based UI for model management and policy management: 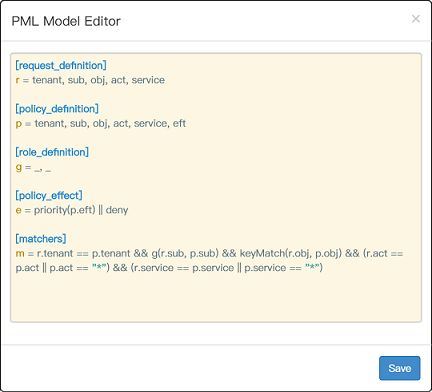 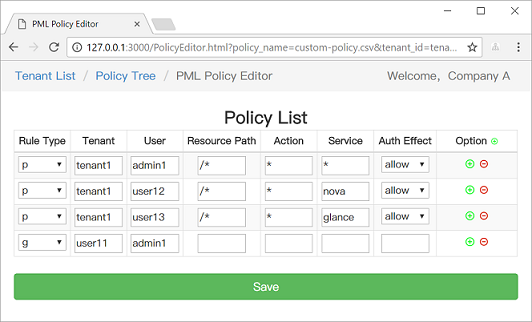 This project exists thanks to all the people who contribute.

Thank you to all our backers! [Become a backer]

Support this project by becoming a sponsor. Your logo will show up here with a link to your website. [Become a sponsor]

If you have any issues or feature requests, please contact us. PR is welcomed.

rbac-audit Have you ever wondered whether your controller actually needs all the permissions it has granted to it? Wonder no more! This repo contains

The easiest JWT library to GO

JWT Go The easiest JWT Library that could be a starting point for your project. Installation go get github.com/supanadit/jwt-go Quick Start package ma

BK-IAM is a centralized permission management service provided by The Tencent BlueKing; based on ABAC

The boss of http auth.

Authboss Authboss is a modular authentication system for the web. It has several modules that represent authentication and authorization features that

G8, pronounced Gate, is a simple Go library for protecting HTTP handlers with tokens. Tired of constantly re-implementing a security layer for each