Gort is considered "minimally viable", but is still a work in progress under active heavy development. Follow for updates!

Gort brings the power of the command line to the place you collaborate with your team: your chat window. Its open-ended command bundle support allows developers to implement functionality in the language of their choice, while powerful access control means you can collaborate around even the most sensitive tasks with confidence. A focus on extensibility and adaptability means that you can respond quickly to the unexpected, without your team losing visibility.

The official documentation can be found here: The Gort Guide.

Gort was initially conceived of as a Go re-implementation of Operable's Cog, and while it remains heavily inspired by Cog, Gort has largely gone its own way.

During our initial design discussion, we found that many of Cog’s features, however innovative, went largely unused, and the codebase had become difficult to extend and maintain. Additionally, its implementation language -- Elixir -- had relatively few proficient developers. The solution, which was discussed for many months on the Cog Slack workspace, was to rewrite Cog from scratch in Go, removing some of less-used functionality and reducing complexity in the process.

This gave us the opportunity to consider and possibly redefine what Cog was meant to be. To choose the features that make sense, and to discard those that don't. In this way, Gort can be described more as a “spiritual successor” to Cog than a faithful re-implementation.

Gort's design philosophy emphasizes flexibility and security by allowing you to build commands in any language you want, using tooling you're already comfortable with, and can tightly control who can use them and how.

Each of these is described in more detail below.

Users may trigger commands through Slack (or another chat provider)

Users primarily interact with Gort through commands, which are triggered by a command character (! by default) but are otherwise conceptually identical to commands entered on the command line. As shown, the output from successful commands is relayed back by Gort.

More information about commands can be found in the Gort Guide:

Commands can be implemented in any programming language

Gort commands are built as container images, which means you can build them in any language you're comfortable with.

What's more, because your executable receives all chat inputs exactly as if it was being typed on the command line, you can use any command line interpreter you want. Commands can even be implemented as Bash scripts, or using existing commands, like curl!

More information about writing commands can be found in the Gort Guide:

Commands are packaged into bundles that can be installed in Gort

In Gort, a set of one or more related commands can be installed as a "command bundle".

A bundle is represented in YAML, specifying which executable to use for each command and who is allowed to execute each commands.

A very simple bundle file is shown below.

This shows a bundle called echo, which defines a command (also called echo) and a permission called can_echo. Once installed, any user with the echo:can_echo permission can execute it in Slack.

More information about bundles can be found in the Gort Guide:

Organize users into groups, and permissions into roles

In Gort, users can be uniquely mapped to users in one or more chat providers. Gort users can be members of one or more groups, which in turn can have any number of roles that can be thought of as collections of granted permissions. For example, the user dave might be in a group called developers. This group may have a role attached named deployers that contains a number of permissions, including one called production_deploy.

More information about permissions and rules can be found in the Gort Guide:

A sophisticated rule system can be applied for each command defining who can use it. These can be quite granular, and are even capable of making permissions decisions based on the values of specific flags or parameters.

Rules are assigned at the bundle level, and can be quite sophisticated. Below we have a subset of a bundle called deploy.

As you can see, the above example includes one command, also called deploy. Its one rule asserts that any user passing "production" as the parameter must have the production_deploy permission (from the deploy bundle).

More information about permissions and rules can be found in the Gort Guide:

All command activities are both emitted as high-cardinality log events (shown below) and recorded in an audit log that's maintained in Gort's database.

Take, for example, a user executing the !bundle list command from Slack:

This will generate log output similar to the following:

As you can see, this rich event includes:

More information about audit logging can be found in the Gort Guide:

How to Run the Gort Controller

For more information, take a look at the Quick Start Guide in The Gort Guide.

The gort binary also serves as the controller administration CLI.

The gort client uses a YAML-formatted configuration file, conventionally located in the profile file in a .gort directory in your home directory. This is where you can store connection credentials to allow gort to interact with the Gort's Controller's REST API.

Comments begin with a # character; if your password contains a #, surround the entire password in quotes, as illustrated above.

You can store multiple "profiles" in this file, with a different name for each (here, we have gort and preprod). Whichever one is noted as the default (in the defaults section) will be used by gort. However, you can pass the --profile=$PROFILE option to gort to use a different set of credentials.

While you can add profiles to this file manually, you can also use the gort profile create command to help.

The gort executable contains a number of commands and sub-commands. Help is available for all of them by passing the --help option. Start with gort --help, and go from there.

Status of This Project

Gort is in a state of active heavy development. The date that various milestones have been achieved are listed below. The number and focus of present and future milestones are subject to change.

FactoriGOChatBot - A Discord chatbot for Factorio written in Golang

Introduction Sarah is a general-purpose bot framework named after the author's firstborn daughter. This comes with a unique feature called "stateful c

Margelet Telegram Bot Framework for Go is based on telegram-bot-api It uses Redis to store it's states, configs and so on. Any low-level interactions

slacker Built on top of the Slack API github.com/slack-go/slack with the idea to simplify the Real-Time Messaging feature to easily create Slack Bots,

Telebot is a Telegram bot framework in Go.

Telebot "I never knew creating Telegram bots could be so sexy!" go get -u gopkg.in/tucnak/telebot.v2 Overview Getting Started Poller Commands Files Se

Parr(B)ot framework A just born Telegram bot framework in Go based on top of the echotron library. You can call it Parrot, Parr-Bot, Parrot Bot, is up

Automated Trader (at) Purpose: Framework for building automated trading strategies in three steps: Build your own strategy. Verify it with the backtes

Prototype rover ground station code About This is part of a second iteration of a rover vehicle (the first being https://github.com/DanCrank/tank-bot-

Glow is a terminal based markdown reader designed from the ground up to bring out the beauty—and power—of the CLI.💅🏻

Glow Render markdown on the CLI, with pizzazz! What is it? Glow is a terminal based markdown reader designed from the ground up to bring out the beaut

Chatto is a minimal chatbot framework in Go.

chatto Simple chatbot framework written in Go, with configurations in YAML. The aim of this project is to create very simple text-based chatbots using

go-wechaty Connecting Chatbots Wechaty is a RPA SDK for Wechat Individual Account that can help you create a chatbot in 6 lines of Go. Voice of the De

A small chatbot for ssh-chat

ssh-chat-bot A small chatbot for ssh-chat. Installation go get -u github.com/sechanakira/ssh-chat-bot You can also clone the repo and then run make in

FactoriGOChatBot - A Discord chatbot for Factorio written in Golang

DeSo is a blockchain built from the ground up to support a fully-featured social network. Its architecture is similar to Bitcoin, only it supports complex social network data like profiles, posts, follows, creator coin transactions, and more.

Getting started Prereqs You will need to install both Go and the protoc compiler (version 3): Go installation protoc installation Install the protobuf

blog-example-service Simple example CRUD backend using Golang, gRPC, and protobufs. Using with MongoDB as the database (default) You will need a Mongo

DeSo: a blockchain built from the ground up to support a fully-featured social network 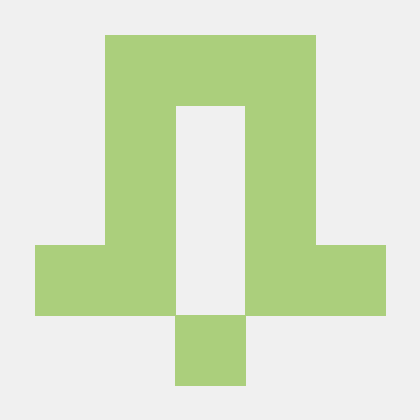 goArgonPass is a Argon2 Password utility package for Go using the crypto library package Argon2 designed to be compatible with Passlib for Python and Argon2 PHP. Argon2 was the winner of the most recent Password Hashing Competition. This is designed for use anywhere password hashing and verification might be needed and is intended to replace implementations using bcrypt or Scrypt.

goArgonPass Travis: Drone: All hashing and crypto is done by Go library packages. This is only a utility package to make the process described easier.