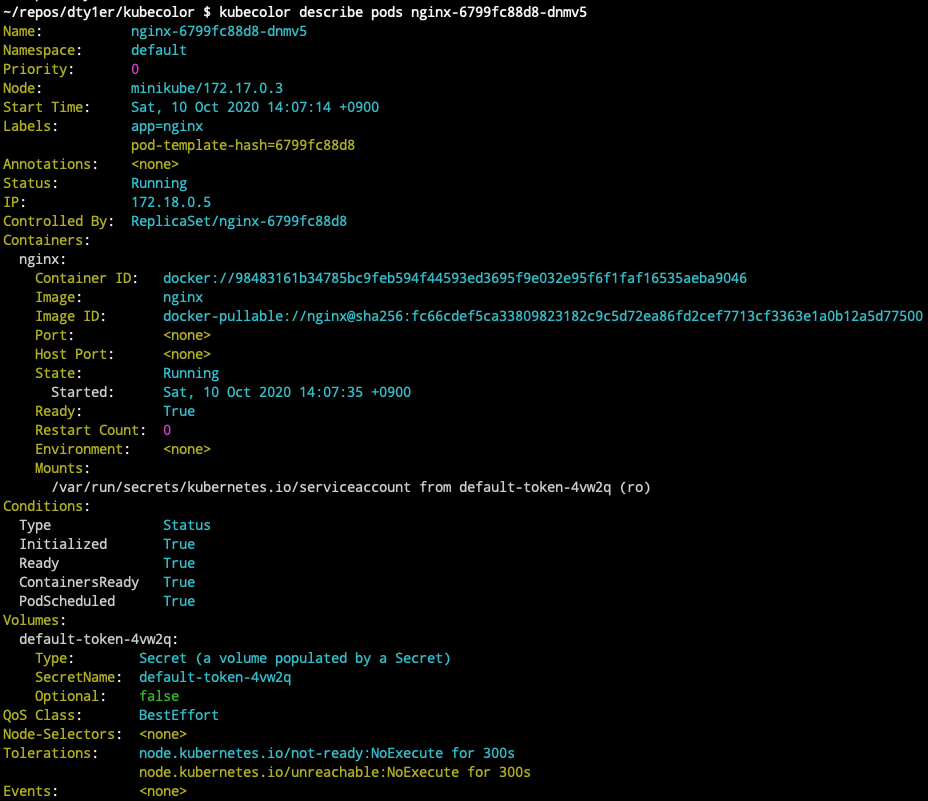 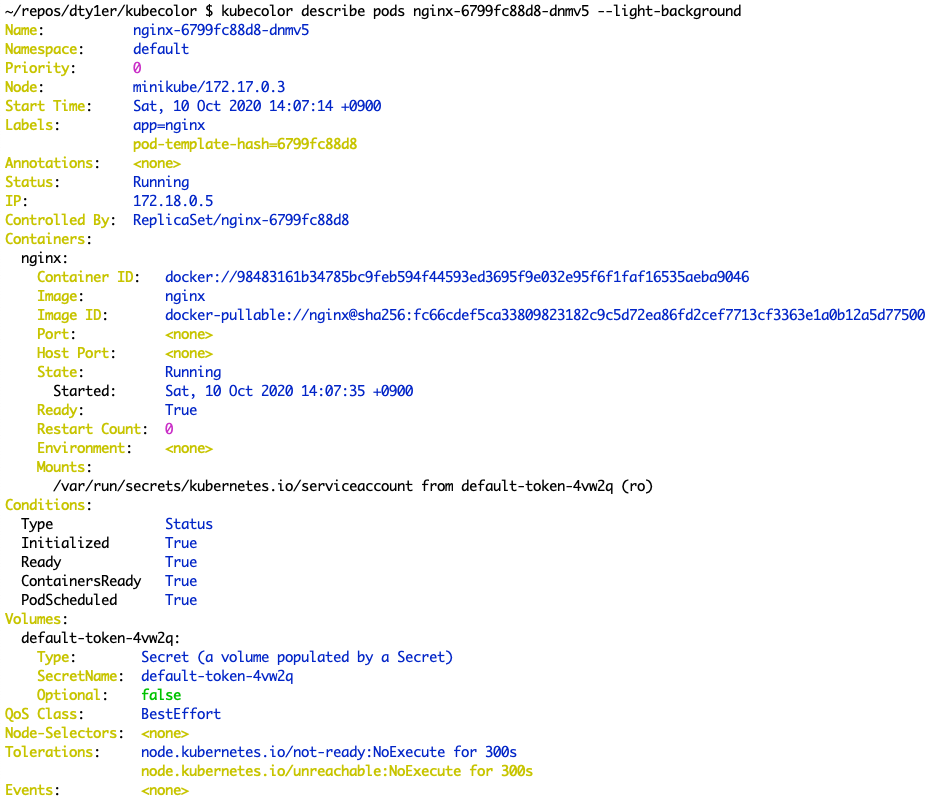 kubecolor colorizes your kubectl command output and does nothing else. kubecolor internally calls kubectl command and try to colorizes the output so you can use kubecolor as a complete alternative of kubectl. It means you can write this in your .bash_profile:

If you use your .bash_profile on more than one computer (e.g. synced via git) that might not all have kubecolor installed, you can avoid breaking kubectl like so:

kubecolor is developed to colorize the output of only READ commands (get, describe...). So if the given subcommand was for WRITE operations (apply, edit...), it doesn't give great decorations on it.

For now, not all subcommands are supported and will be done in the future. What is supported can be found below. Even if what you want to do is not supported by kubecolor now, kubecolor still can just show kubectl output without any decorations, so you don't need to switch kubecolor and kubectl but you always can use kubecolor.

Additionally, if kubectl resulted an error, kubecolor just shows the error message in red or yellow.

Go to Release page then download the binary which fits your environment.

Mac and Linux users via Homebrew

Note: if you install kubecolor via go command, --kubecolor-version command might not work

If you are not using module mode (or if just above doesn't work), try below:

kubecolor understands every subcommands and options which are available for kubectl. What you have to do is just using kubecolor instead of kubectl like:

If you want to make the colorized kubectl default on your shell, just add this line into your shell configuration file:

Prints the version of kubecolor (not kubectl one).

When you don't want to colorize output, you can specify --plain. Kubecolor understands this option and outputs the result without colorizing. Of course, given --plain will never be passed to kubectl. This option will help you when you want to save the output onto a file and edit them by editors.

kubectl provides autocompletion feature. If you are already using it, you might have to configure it for kubecolor. Please also refer to kubectl official doc for kubectl autorcomplete.

For zsh make sure these lines are present in your zsh config file:

However, there are 2 ways we can make them work. Please keep in mind these are a kind of "hack" and not officially supported.

Specify what command to execute as kubectl

Sometimes, you may want to specify which command to use as kubectl internally in kubecolor. For example, when you want to use a versioned-kubectl kubectl.1.19, you can do that by an environment variable:

When you don't set KUBECTL_COMMAND, then kubectl is used by default.

Because kubecolor internally calls kubectl command, if you are using unsupported kubectl version, it's also not supported by kubecolor. Kubernetes version support policy can be found in official doc.

Krew is unsupported for now.

Always welcome. Just opening an issue should be also greatful.

telegraf-exec-fronius This is a simple tool to extract Fronius solar data logger output and output Influx line protocol; it is designed to be used wit

ksniff A kubectl plugin that utilize tcpdump and Wireshark to start a remote capture on any pod in your Kubernetes cluster. You get the full power of

k8s-manifest-sigstore kubectl plugin for signing Kubernetes manifest YAML files with sigstore ⚠️ Still under developement, not ready for production us

kubectl-secret-data What is it? This is a kubectl plugin for finding decoded secret data. Since kubectl only outputs base64-encoded secrets, it makes

A 'kubectl' plugin for interacting with Clusternet.

kubetnl tunnels TCP connections from within a Kubernetes cluster to a cluster-external endpoint, e.g. to your local machine. (the perfect complement to kubectl port-forward)

kubetnl kubetnl (kube tunnel) is a command line utility to tunnel TCP connections from within a Kubernetes to a cluster-external endpoint, e.g. to you 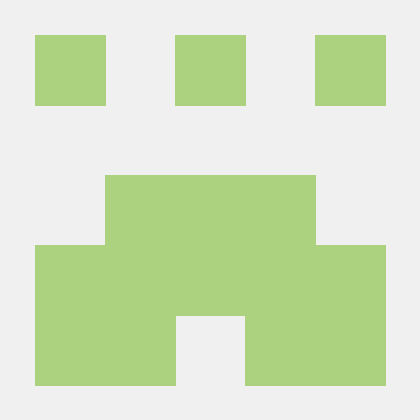 kubectl-secret-data What is it? This is a kubectl plugin for finding decoded secret data. Since kubectl outputs base64-encoded secrets basically, it m

A kubectl plugin for getting endoflife information about your cluster.

kubectl-endoflife A kubectl plugin that checks your clusters for component compatibility and Kubernetes version end of life. This plugin is meant to a

A kubectl plugin to evict pods

kubectl-evict A kubectl plugin to evict pods. This plugin is good to remove a pod from your cluster or to test your PodDistruptionBudget. ?? Installat

The Coherence command line interface (CLI) is a lightweight tool, in the tradition of tools such as kubectl

A replacement for "kubectl exec" that works over WebSocket connections.

kubectl-execws A replacement for "kubectl exec" that works over WebSocket connections. Kubernetes API server has support for exec over WebSockets, but 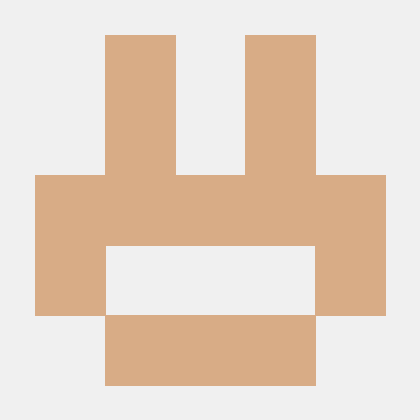 Simple tool to generate dockerconfigjon. This use snippets from kubectl.