Easy to use distributed event bus similar to Kafka

Easy to use distributed event bus similar to Kafka.

The event bus is designed to be used as a persistent intermediate storage buffer for any kinds of events or logs that you might want.

Possible usages for Chukcha are basically the same as for Kafka, including, but not limited to:

The messages are expected to be delimited by a new line character, although there are no other limitations in terms of events format: it can be JSON, plain text, Protobuf (with \ and new line character escaped), etc.

Compared to Kafka, Chukcha does not guarantee that the messages will be delivered in order or exactly once. You can come close to getting a total order of messages if you always write a single instance, but in that case if that instance fails there would be no way of knowing whether or not data was actually flushed to disk and/or replicated so you would have to retry sending the message to another node in the cluster, so messages can be duplicated. Arguably, the same applies to Kafka, however Kafka provides much stricter guarantees by basically forcing you to always write to the partition leader instead of a random node. Since there is no such concept as a partition leader in Chukcha and all nodes are equal, achieving total messages order is much more difficult.

In Chukcha you are encouraged to spread the write and read load across all the nodes in Chukcha cluster so events order will not be preserved because of async replication being the default. Also please keep in mind that in order to achieve the best performance you would probably want to write data in batches and not just write a single message at a time, so because of that events from every client will need to be buffered and there will be no total event order in that case either. You can see the illustration below that covers this. 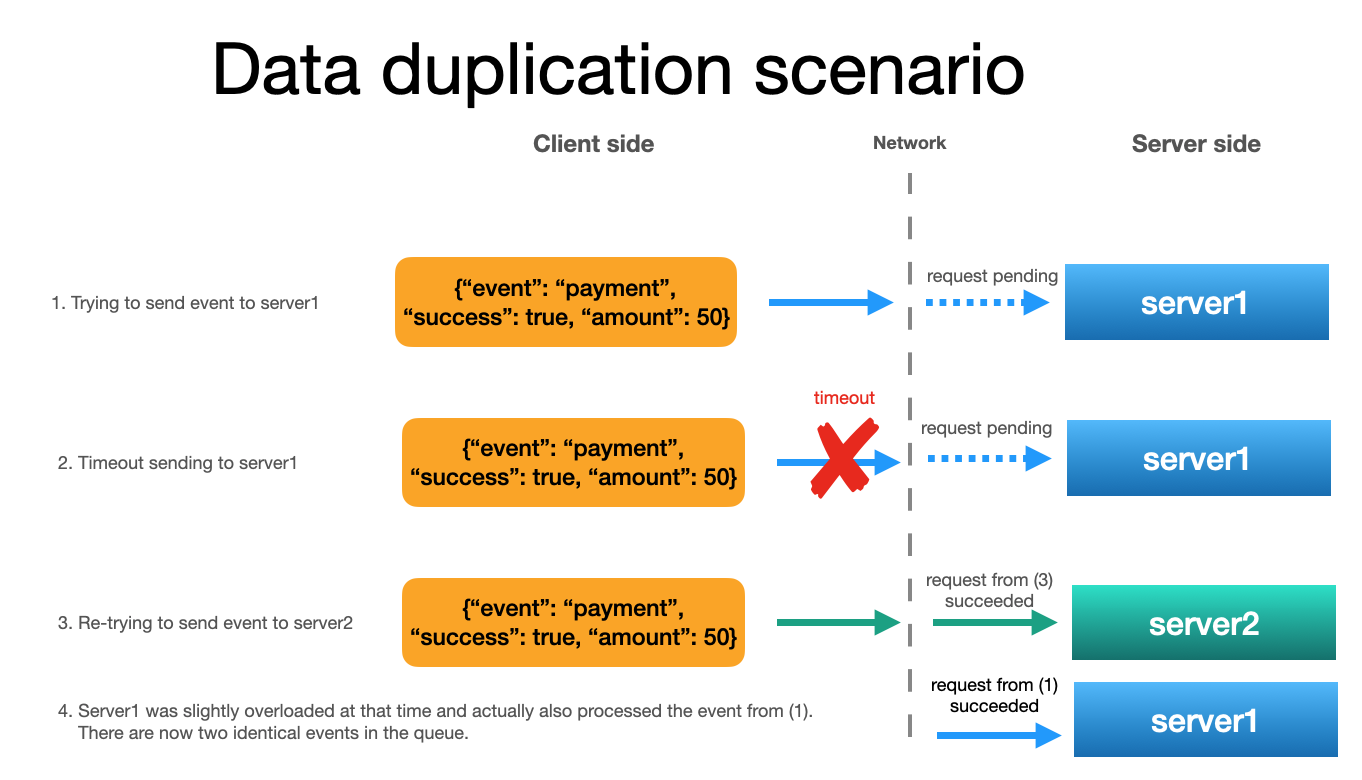 Handling data duplication and not having a strict order of events

In many situations duplicating data (or losing it entirely) in case of errors is OK and you don't need to do anything special about that scenario. However, in many cases it actually does matter and the clients need to be able to handle it. Even if you think you don't have that problem in Kafka you probably just lose data instead of having duplicates, which is not ideal in many situations either. In Kafka it's actually possible to both lose data and have duplicates and out-of-order events too in the presence of failures if you are not careful!

Basically the solution to both data being duplicated and loose order of events is the same: idempotency. For example, in the data duplication scenario above you don't want to send just an event that "something happened", you also want to attach a unique event ID to each event that you are sending. When processing each event, e.g. recording it to a database, you then make sure that in a single transaction you first make sure that you haven't processed that event before, e.g. by using a separate table for that, and then doing the actual processing.

If you are doing things that are idempotent by nature, e.g. indexing documents, make sure to only send events like "entity with ID changed" and not the entity contents. This way you would have to fetch the most recent contents of that entity from your persistent storage when processing the event and thus you always have up-to-date index. Otherwise you can end up in a situation when the newer versions of the entity are processed before the older ones (this can happen e.g. if you manage to read events that were sent to two different Chukcha nodes at different times) and having a stale index instead. Make sure to update the persistent storage before sending an indexing event too.

If you are using e.g. ClickHouse make sure you are using e.g. a *ReplacingMergeTree engine family and collapse events by a unique event id generated in your client when sending the event so that duplicates are removed when doing merges.

There is no such thing as sending e-mail idempotently. You would have to resort to keeping track of e-mails that you already sent successfully in a separate database and have a small chance of sending the last e-mail in the queue more than more once in case of failures. You can limit the number of attempts by consulting the database both before and after attempting to send an e-mail and e.g. limit the number of attempts before giving up on that particular entry.

By default the data is not flushed to disk upon each write, but this can be changed in the server config or per request.

The data durability guarantees are thus the following:

By default data written to a single node can be lost, if:

(TODO): When min_sync_replicas is greater than 0, data will only be lost if:

(TODO2): When sync_each_write=true is set 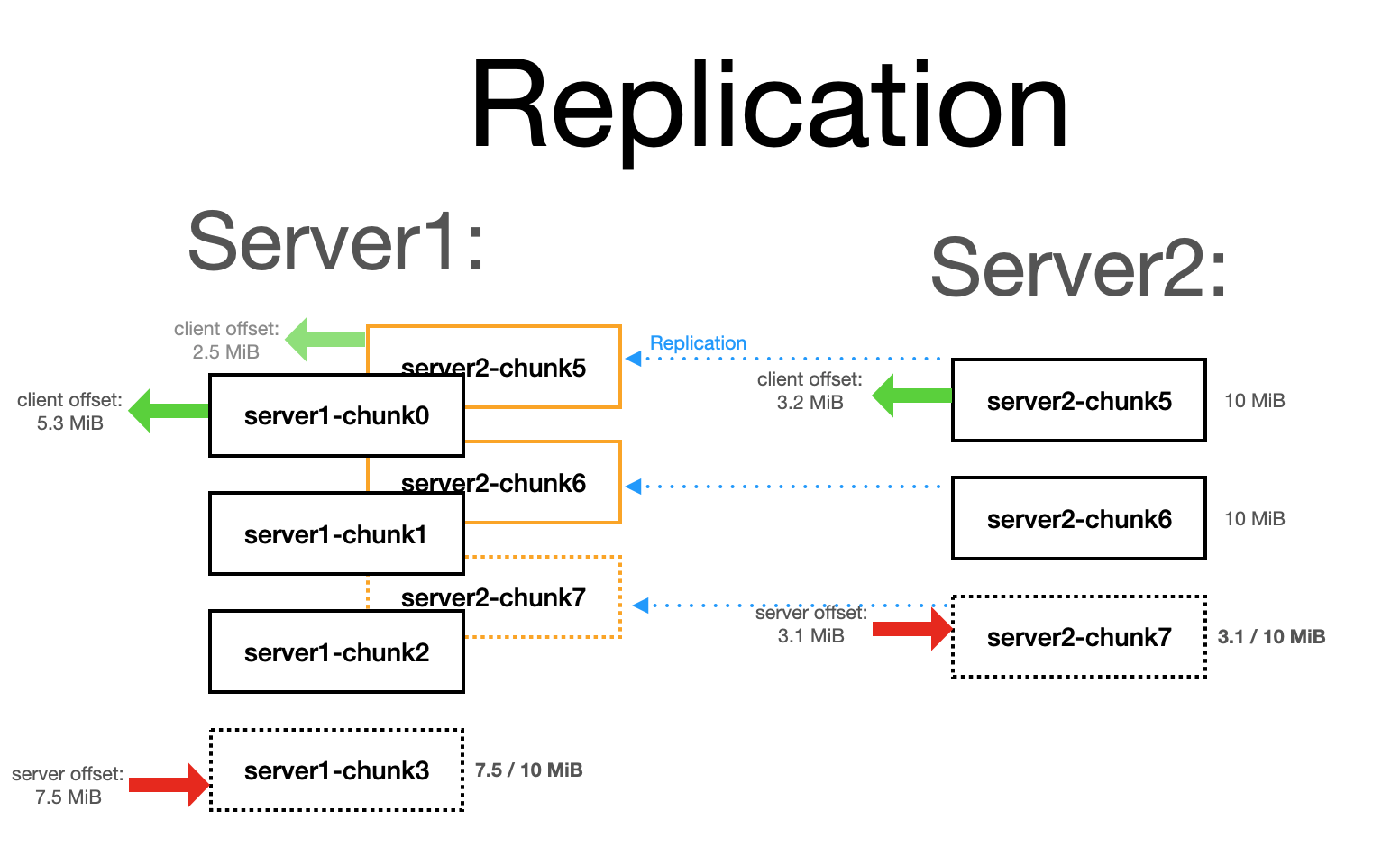 It's too early to start using it yet! If you really want to, you can, of course, but keep in mind that this is a project still in the early days of it's development and it's API will probably change a lot before stabilising.

If you really want to use Chukcha, please refer to the simple Go client library at https://pkg.go.dev/github.com/YuriyNasretdinov/chukcha/client.

provider-kafka is a Crossplane Provider that is used to manage Kafka resources.

provider-kafka provider-kafka is a Crossplane Provider that is used to manage Kafka resources. Usage Create a provider secret containing a json like t

?? Bus Bus is a minimalist event/message bus implementation for internal communication. It is heavily inspired from my event_bus package for Elixir la

Gin best practices, gin development scaffolding, too late to explain, get on the bus.

MessageBus Simple Message Bus Written in Golang How to Use go get gopkg.io/Usada

Sarama is a Go library for Apache Kafka 0.8, and up.

sarama Sarama is an MIT-licensed Go client library for Apache Kafka version 0.8 (and later). Getting started API documentation and examples are availa

Implementation of the NELI leader election protocol for Go and Kafka

goNELI Implementation of the NELI leader election protocol for Go and Kafka. goNELI encapsulates the 'fast' variation of the protocol, running in excl

ChanBroker, a Broker for goroutine, is simliar to kafka

Introduction chanbroker, a Broker for goroutine, is simliar to kafka In chanbroker has three types of goroutine: Producer Consumer(Subscriber) Broker

Apache Kafka Web UI for exploring messages, consumers, configurations and more with a focus on a good UI & UX.